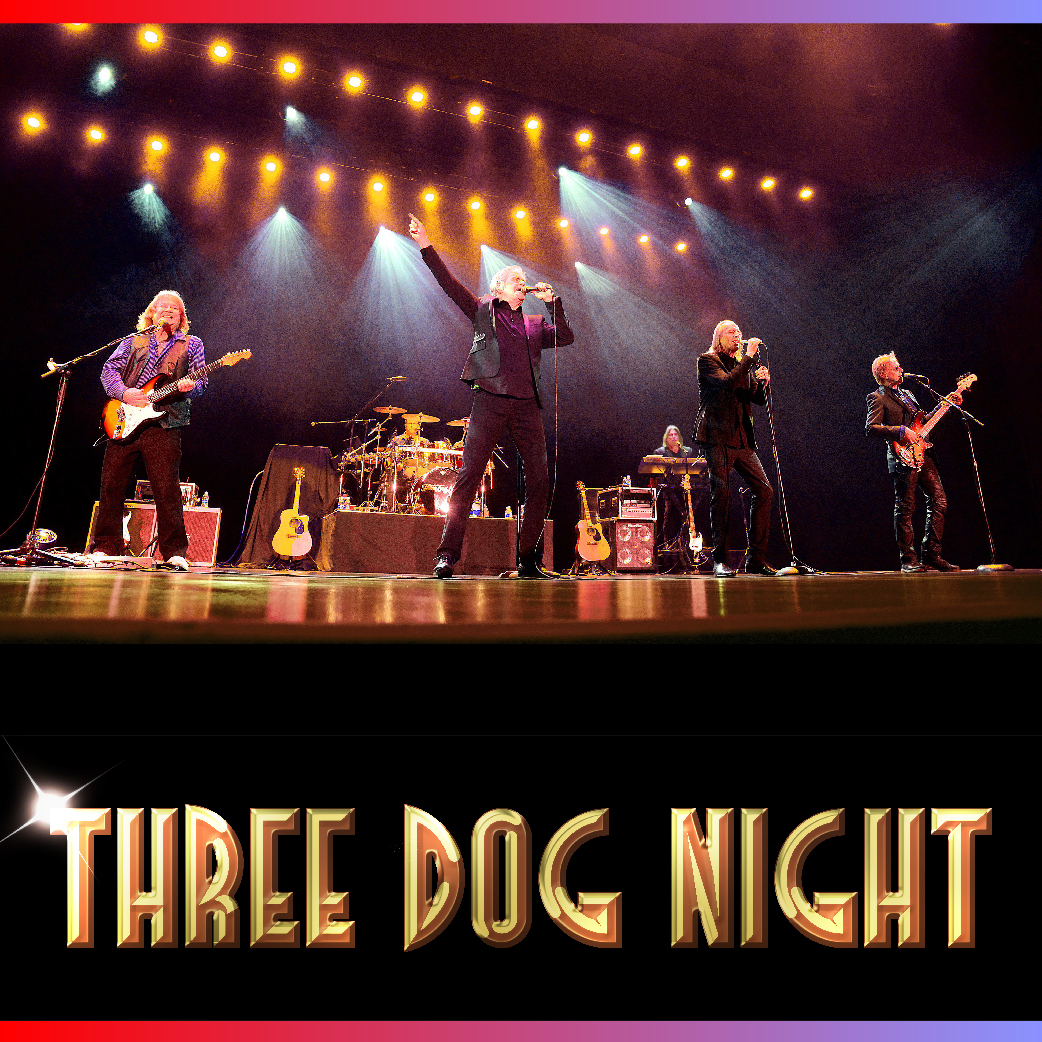 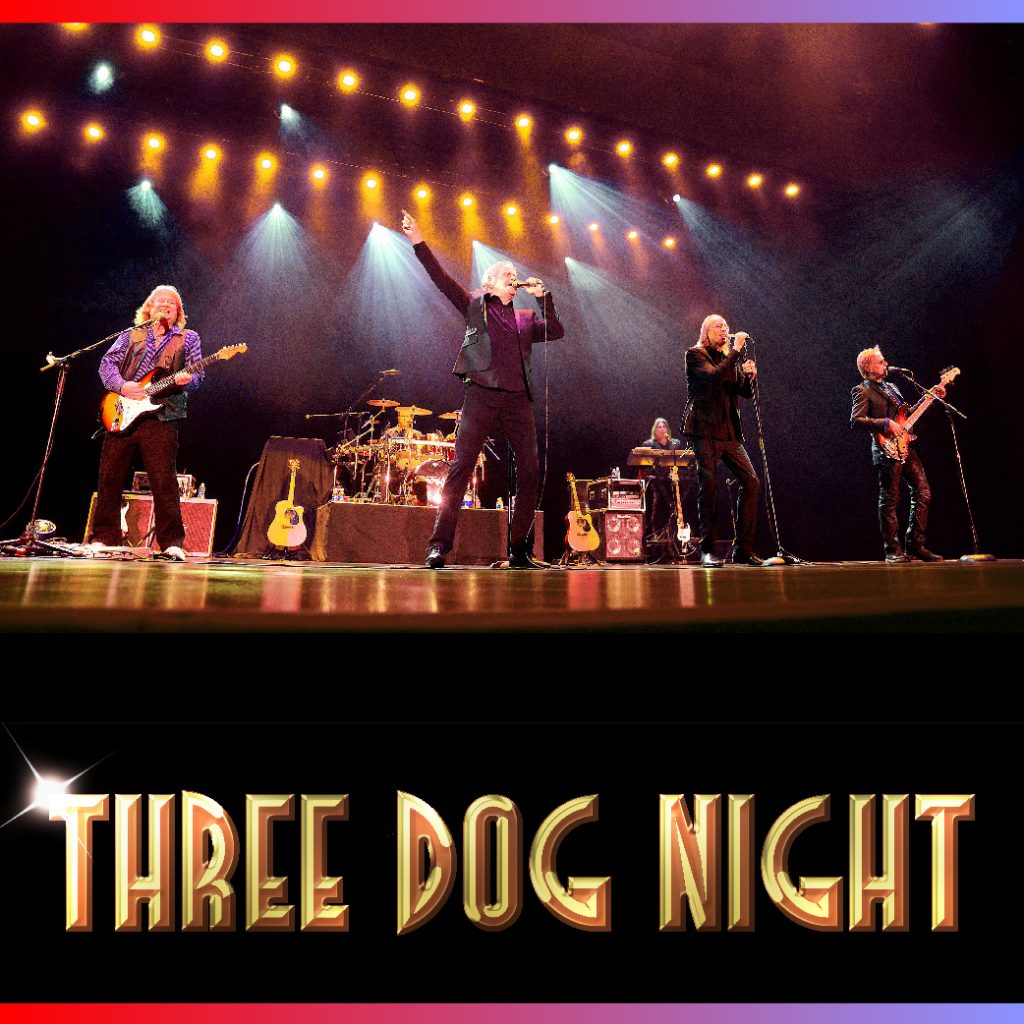 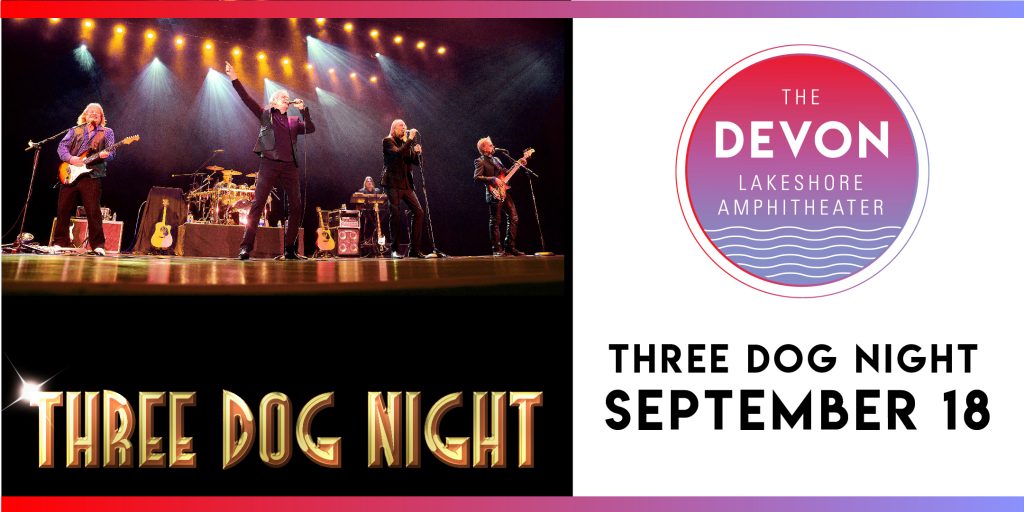 Legendary band, THREE DOG NIGHT, now in its 5th decade, claims some of the most astonishing statistics in popular music. In the years 1969 through 1974, no other group achieved more top 10 hits, moved more records or sold more concert tickets than THREE DOG NIGHT.

THREE DOG NIGHT hits weave through the fabric of pop culture today, whether on the radio where they are heard day in and day out, in TV commercials or in major motion pictures -- songs like “Mama Told Me (Not To Come)”, “Joy to the World”, “Black and White”, “Shambala” and “One” serve to heighten our emotions and crystallize THREE DOG NIGHT’s continuing popularity.

This Grammy-nominated band is not content resting on its legacy alone. Always working to expand its audience, THREE DOG NIGHT has embraced and been embraced by 21st century music technology. New and existing fans buy THREE DOG NIGHT’s music on iTunes as well as at record stores. In fact, releases from this decade alone have sold well over a million copies.

THREE DOG NIGHT also pushed boundaries by recording with the London Symphony Orchestra, giving fans new and old a chance to experience its dynamic performances of the hits as well as several new songs. The project, recorded at the famous Abbey Road studios in London and released to coincide with the band’s 35th Anniversary, added exciting new orchestral arrangements to THREE DOG NIGHT’s signature sound.

THREE DOG NIGHT maintains an aggressive, year-round touring schedule of over 70 dates a year. The hit filled concerts are performed for generation-spanning audiences by Danny Hutton (founder/lead vocalist) and Michael Allsup (guitar) with Paul Kingery (bass/vocals), Pat Bautz (drums),) David Morgan (vocals) and Howard Lavarea (keyboards). The band’s now-famous name refers to native Australian hunters in the outback who huddled with their dogs for warmth on cold nights; the coldest being a “three dog night”.Boasting chart and sales records that are virtually unmatched in popular music, THREEDOG NIGHT had 21 consecutive Top 40 hits, including 3 #1 singles, 11 Top 10’s, 18 straight Top 20’s, 7 million-selling singles and 12 straight RIAA Certified Gold LPs. The hits appeared on best selling charts in all genres (pop, rock and country). Its records continue to sell around the world, reaching beyond the borders of the U.S. into Japan, Canada, Holland, England, Germany, Spain and elsewhere. Tens of millions of THREE DOG NIGHT records have been sold through the years.

Created in 1968 by Danny Hutton, THREE DOG NIGHT recorded the music of the best (and mostly undiscovered) new songwriters of their time including Harry Nilsson, Randy Newman, Elton John, Laura Nyro, Paul Williams and Hoyt Axton among many others.

The group’s eclectic taste, combined with their ability to recognize and record hits in a unique, distinctive and appealing style, resulted in THREE DOG NIGHT dominating the charts for years.

Now, marking 50 years on the road, THREE DOG NIGHT continues to grow its fan base by keeping up a full schedule of concerts at theatres, performing arts centers, fairs, festivals, corporate events, and casinos. Since 1986, the band has performed over 2,500 shows including two Super Bowls.

Never Been To Spain #5

Danny McGaw sings with an emotional charge that commands any room. His intimate delivery of an acoustic ballad explodes into the driving rhythm of an indie-rock anthem, as Danny takes the listener on a journey that has range, depth, and raises the spirit. There is a reason fans describe going to a Danny McGaw show as “going to church”.

The Salford born songwriter began his career as a pro soccer player in the north of England before migrating to the States and turning to music.  For several years he honed his skills as a singer, busking in the streets of Santa Monica. Then after moving to Kansas City, Danny built a reputation as one of the Mid West’s most prolific writers and well-loved performers.

In 2013 he formed the soul rock band, Wells the Traveler, recording two albums before relocating back to the West Coast in 2015. Landing in Ojai, California, Danny found kindred spirits in this creative community. Tim Arlon, another British ex-pat, brought piano, harmonies and a rare chemistry to Danny’s live shows. With the addition of Matt Cheadle’s inventive guitar playing, the uplifting energy of Tim Hutton on bass, and Greg Weiser's drumming to lock them all down, the Danny McGaw Band has become the most energized expression of Danny’s music to date.

The band’s new album, ‘Northern Lad’, was recorded and produced by Grammy award winner, Tim Hutton, at The Canyon Hut. “Hutton really grasped my vision for this record,” says Danny, “Big hooks, guitars, harmonies… more punk rock than folk rock.”  But while ‘Northern Lad’ makes no apology for being a rock album, it has the emotional breadth that is the signature of Danny McGaw’s work.