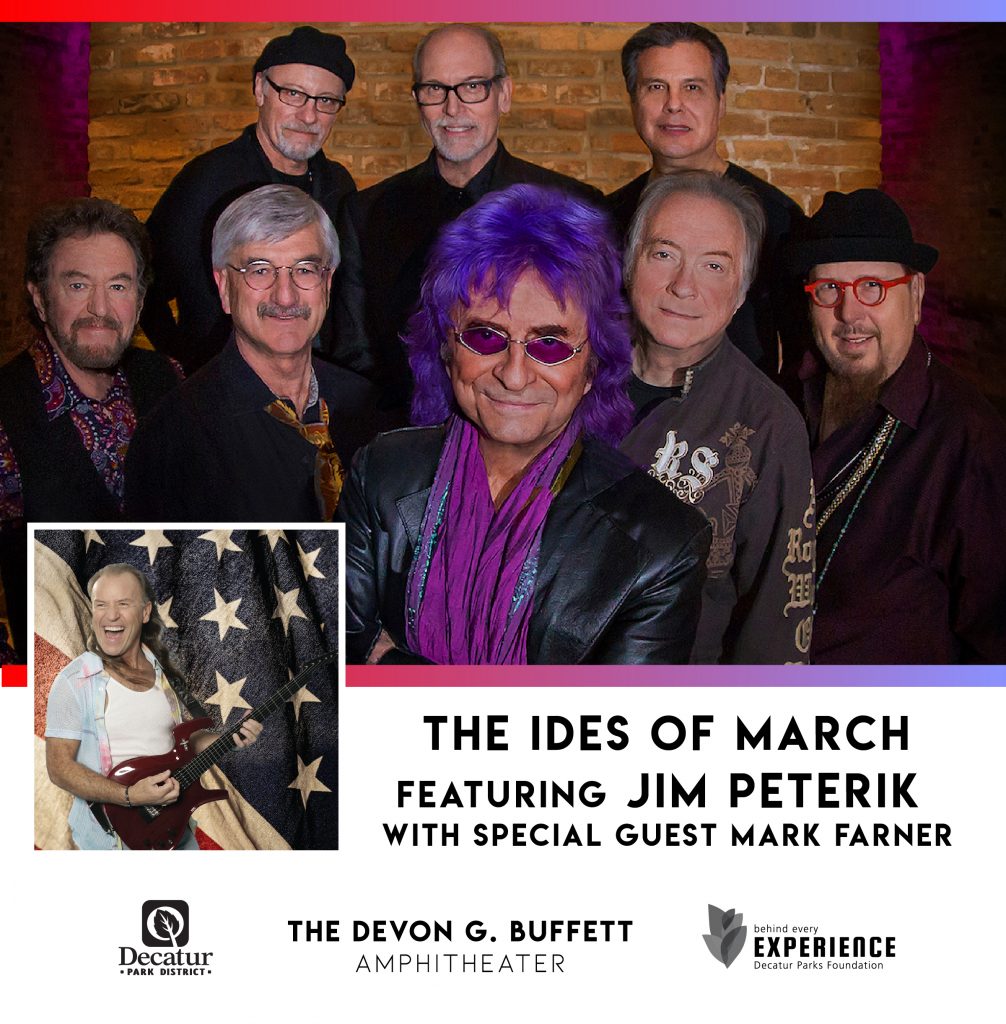 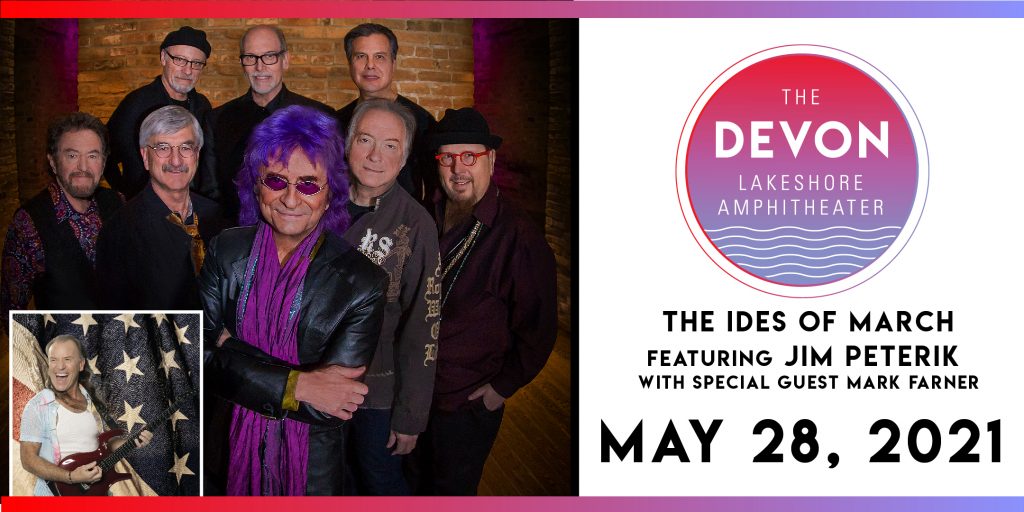 ABOUT THE IDES OF MARCH FEATURING JIM PETERIK

Since 1964 Chicago’s IDES OF MARCH have thrilled audiences throughout the United States and Canada with their mix of rocking guitars, brilliant brass, and heartfelt vocals.

Powered by the unforgettable songs of Grammy-Winner Jim Peterik, their music has become an evergreen feature on radio stations everywhere, in movie soundtracks, and national advertising campaigns. Their live shows are legendary for their energy and sheer enjoyment.

Defying the odds, the four original members — Jim Peterik, Guitar; Larry Millas, Guitar; Bob Bergland, Bass; and Mike Borch, Drums — have remained together, weaving their way through the shifts in popular music, and always rising to action in creating a show that remains at the peak of entertainment. The original members are now joined by Scott May, Keyboards; Tim Bales, Trumpet; Henry Salgado, Trombone; and Steve Eisen, Saxophone.

That show has become a cornucopia of platinum hits, starting with the Ides’ own immortal “Vehicle.” Upon its release in April of 1970, the brass-driven tale of the “friendly stranger in the black sedan” became Warner Brother’s fastest selling single of all time, and to this very day is played daily on radio stations throughout the world. It has become one of those rare chestnuts that no matter how many times you hear it, you never tire of it. In contrast to the power of “Vehicle” lies the lush vocal harmonies of “L.A. Goodbye,” the centerpiece of the unplugged mini-set inside each Ides Of March concert. Their 1965 debut single “You Wouldn’t Listen” harkens back to the British invasion of the time. It is astounding to hear the band so nimbly returning to its roots, summoning the voices of their youth.

Jim Peterik’s songs have garnered 18 top-10 Billboard spots and have sold over 30 million copies, earning him a Grammy(tm), a People’s Choice award, an Oscar nomination, and multiple Gold and Platinum RIAA commendations. These songs are among everyone’s favorites, and are all instantly recognizable. His collaborations with .38 Special – “Caught Up In You,” “Hold On Loosely,” and “Rockin’ Into The Night” (to name a few) vaulted to the top of the charts. These songs have transcended genres over the years, becoming as beloved by Country Music fans as Rockers, and appealing throughout the ages from Bobby Soxers to Baby Boomers to Millenials.

A former member of the group Survivor, Jim co-wrote all their smash hits such as “The Search Is Over,” “Is This Love,” “High On You,” “I Can’t Hold Back,” and yes, Jim co-wrote “Eye Of The Tiger,” one of the most popular songs of all time.

All of these songs and more are featured in the Ides Of March set, making it a non-stop juggernaut of everyone’s favorite tunes, a tour of the American Music Songbook touching on multiple genres ringing memories as only hit songs can. Led by Jim (with his trademark purple hair), their energetic stage presence and unmistakable charisma draws you in, leaving you with a smile. Further, their humble and dignified presence off-stage has earned them a bonafide respect among promoters, producers and professionals from coast to coast.

Chicago’s very own “THE IDES OF MARCH”, for over 50 years, an irresistible favorite.

GREAT GOD IN HEAVEN YOU KNOW THEY LOVE YOU!

Legendary all-American frontman and guitarist Mark Farner was the engine that pulled the original Grand Funk Railroad to the top of the charts, and today he’s a platinum recording artist 30 times over. At age 69, Farner commands the stage with the same intensity and outpouring of love as he did at 20 during the summer of ’69, and his fans are still flocking to the Captain. The rock patriot’s synergy and open heart come through in epic hits that defined a generation— “I’m Your Captain (Closer to Home),” “We’re An American Band,” a recut of “The Loco-Motion,” and “Some Kind of Wonderful”— and “rock star” is only one facet of this Michigan-born son’s legacy. Farner is also about as real as they get: He’s a husband, in his fourth decade of marriage to wife Lesia. He’s a family man.

“I think our fans connected to our songs because we were sincere,” Farner said. “My lyrics were about Mother Earth, stop the war, and all about love. They still have a point of reference with me in their heart.”

After the 1969 Atlantic Pop Festival put Grand Funk Railroad on the fast track, the band topped the Billboard Chart twice with the anthem “We’re an American Band” (1973) and 1974’s “The Loco-Motion.” The Flint, Mich., trio reached the top 10 with “Some Kind of Wonderful” (No. 3) and “Bad Time” (No. 4) before GFR disbanded for the first time in 1976. Although Farner joined up with the band during its 1980s and 1990s reunifications and has collaborated with other artists over the years, he’s forged an enduring solo career focused on bringing a message of love to his fans in all corners.

“Love is unconditional,” he said. “Just like when you hold a baby, the love transfers. I feel that when I’m on stage from the audience.”

The son of a World War II veteran/four-time bronze star recipient and career fireman also knows the importance of brotherhood and commitment. On his mother’s side, he champions his Cherokee heritage and the fact that his mother was the first women welder in the United States to weld on a tank during World War 2. It just happened to be the same type of Sherman tanks his father drove. Farner’s work on and off the stage is focused on honoring service personnel and veterans and offering support to American farmers, individuals with disabilities, and downtrodden populations.

Farner, the rock patriot that he is, works tirelessly to honor service personnel and Veterans everywhere. He wants everyone to remember the huge sacrifices the men and women of our armed services give up to protect our amazing country and our freedoms.

“I love playing where I can connect with people of all backgrounds,” he said. “My family and I are so grateful when fans share that they are praying for us and praying for Jesse. We have challenges like most people – we get through the day with each other and focus on the power of positive energy.”